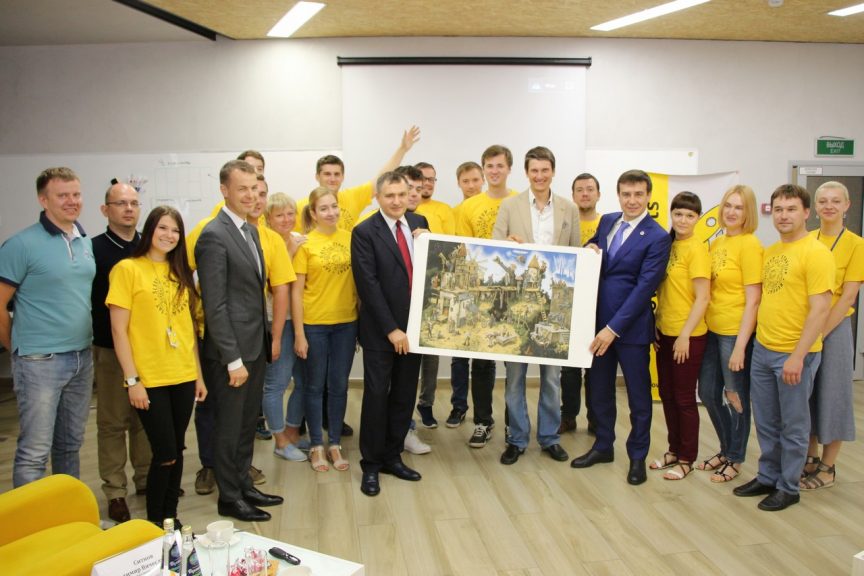 30 June Samara was visited by Lev Khasis, first deputy chair of the management board of PAO Sberbank.


One of his ports of call was the startup greenhouse of YellowRockets. Originally set up as One-Stop Service for Technological Entrepreneurship with support from the provincial government, the StartupSamara project has in three years emerged as a federal startup accelerator, famous across Russia. Its mission is to organize training events for startups, run acceleration programmes and bring in seed capital for startups.
To date, the project database includes details of more than 970 projects. YellowRockets has been instrumental in creating more than 850 jobs, providing financial support to 250 projects totalling in excess of 650 mln rbl., with the total annual earnings of funding beneficiaries exceeding 2.3 bln roubles. Sergey Bogdanov, head of YellowRockets, told Lev Khasis about the philosophy of the startup greenhouse, as well as describing several projects involving both finance and IT.
“Sberbank is mostly interested in projects focused on IT solutions that we plan to use in areas such as services to small businesses, public health service, education, telecommunications etc,” said Lev Khasis. “Here and elsewhere we will set up whole ecosystems, using interesting projects, including startups. That is why we will take a close look at YellowRockets’ proposals for joint action.
Aleksandr Kobenko, vice governor and minister for economic development, investment and trade of Samara Oblast, who attended the meeting, said that the region had been putting its money on innovations for many years now:
“Samara Oblast has now been consistently ranked in the top five regions with innovation-driven growth. I am confident that we have a very bright future with Sberbank as regards the implementation of innovation projects.”
Latest news: